Come and spend 3-4 hours in the Jewish Quarter at a special price. The ticket includes entrance to the Davidson Center and a choice of 2 additional sites from: the Burnt House, the Herodian Quarter, the Hurva Synagogue and the Plugat HaKotel House

A special journey in time to the ancient days, the glorious days of Jerusalem, when it was a magnet for the whole world. Stand under the remains of the Robinson Arch which was the oldest interchange in the world, visit the remains of the shops that stood on the side of the road and witness the mikvahs of purity that were used by the pilgrims to the Temple. On the journey you will get to walk on the wide steps that King Herod built and led to the temple plaza, view the remains of the national palaces that stood in all their glory a few hundred years later, visit the impressive Byzantine rooms that stand on the site and march on the Ottoman wall overlooking the whole area. 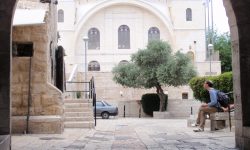 Few are the buildings that become such distinct symbols in the landscape of a city, all the more so in a city with many symbols like Jerusalem.
The Beit Yaakov or Horba synagogue has gained this unique and distinct status over the years. The surroundings of the synagogue also became one of the most prominent sites of the Jewish community in Jerusalem, especially after its completion in 1864.
Around the synagogue were some of the most important institutions of the Ashkenazi community in Jerusalem: Yeshivat Etz Chaim, the Beit Din, charitable and charitable institutions and betei midrash – institutions that were the characteristics of Jewish life in Jerusalem from the nineteenth century until the new age.

In 1967, the State of Israel began a huge archeological excavation in the Jewish Quarter that had never been excavated before. The diggers had no idea what the level of finds would be. In retrospect it can be said that the findings they found are some of the most important and exciting findings ever found. Remains of Jerusalem over 3000 years have been uncovered throughout the area.

During the Second Temple period, Jerusalem was built on two nearby hills. Mount Zion and Mount Moriah. On Mount Zion, or in the other nickname of the mountain – the western hill, the aristocratic houses of the city of Jerusalem were built. Among them were rich and some were priestly families.

“Whoever rules the Old City will rule the whole country” (diary of the Western Wall Company, Uri Zvi Greenberg). What happens when a group of young Zionist activists from the Betar movement decide to establish a defense system for the residents of the Jewish Quarter and the Old City from the Muslims and the British? Who is the brave and powerful company that agreed to risk the lives of its members A Zionist story about settlement in Jerusalem and the importance of the city.There are two audio-visual exhibits that tell the extraordinary heroic story of the struggle against the British Mandate with the aim of preserving the tradition and connection of the Jewish people to Jerusalem and the Western Wall.

Get information from us